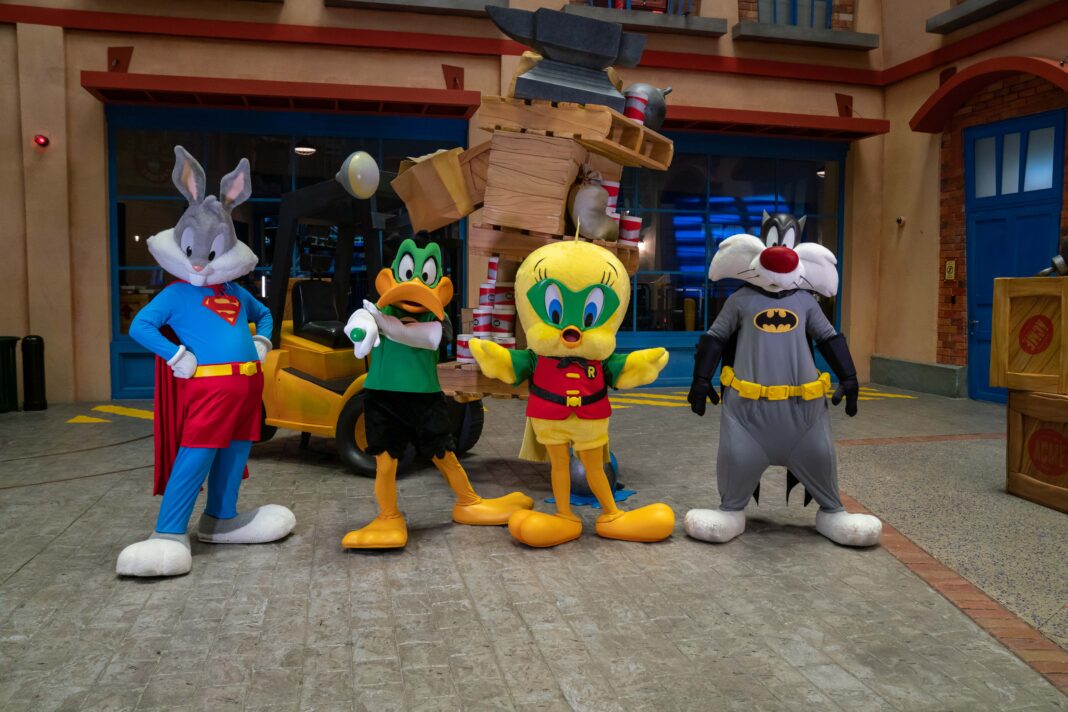 Warner Bros. World™ Abu Dhabi will surprise DC fans with the debut of its brand-new ‘DC Super Hero Season,’ which will run daily from July 2 to September 4. Featuring thrilling celebrations, new Justice League character appearances, and family-friendly entertainment throughout the Park, guests and families are certain to enjoy a number of hero-inspired activations alongside their favourite Super Heroes at this extremely immersive indoor theme park.

As guests arrive at the Park’s exterior, they are greeted with the DC Super Hero Season theming and the shaded capes for a photo opportunity with their friends and family. The Park’s entrance and rotunda columns are adorned with Super Hero-inspired décor and overlays, including the iconic Bugs Bunny figure donning Superman’s cape.

At the Warner Bros. Plaza, guests can begin their tour of the Park’s six immersive zones with a variety of Super Hero-themed activities and entertainment. In addition, park-goers will get the opportunity to meet their favourite DC Heroes and Looney Tunes characters dressed as Super Heroes for a fantastic photo opportunity for the whole family.

Metropolis is the place to be if you’re looking to be a part of the action. As guests reach the City of Tomorrow, three new Super Heroes will make their debut appearance at Warner Bros. World Abu Dhabi this season, joining the Justice League’s characters. The Justice League will be stationed in front of the Hall of Justice, where park-goers will have the opportunity to meet their favourite Super Heroes before joining the parade through Metropolis.

Guests who aspire to become Super Heroes for a day can visit the Civic Auditorium to participate in the Green Lanterns in Training, where they will learn what it takes to protect Metropolis and prepare to become future Justice League members. Big Belly Burger will provide park-goers with the best treats to get them back on the road to enjoy the rest of the activities in Metropolis.

Guests will be able to witness extraordinary acrobatic and musical performances as they continue to explore the City of Tomorrow, as well as participate in other activities such as the DC Super Hero Mosaic Series at Ace O’ Clubs Patio.

Right across, Gotham City will host ‘Revenge,’ the fan-favorite live event in which Batman battles Super-Villains Harley Quinn and Scarecrow as he protects the city from crime.

At Cartoon Junction, both young and elderly children can enjoy the fan-favorite Super Looney Tunes Dance Party, which has Bugs, Daffy, Sylvester, and Tweety costumed as Super Heroes and hosting a dance party. At Cartoon Junction, the Super Looney Tunes will be waiting for guests to wear their personalised capes and capture exciting moments and humorous images with their favourite characters on stage.

This summer, Warner Bros. World Abu Dhabi offers never-ending fun with its abundance of family-friendly entertainment and Super Hero-themed activities. That’s Not the End, Folks! During the DC Super Hero Season, be sure to purchase your exclusive custom-made capes and indulge in the Park’s delectable F&B choices and meal combos, which will only be available for a limited time.