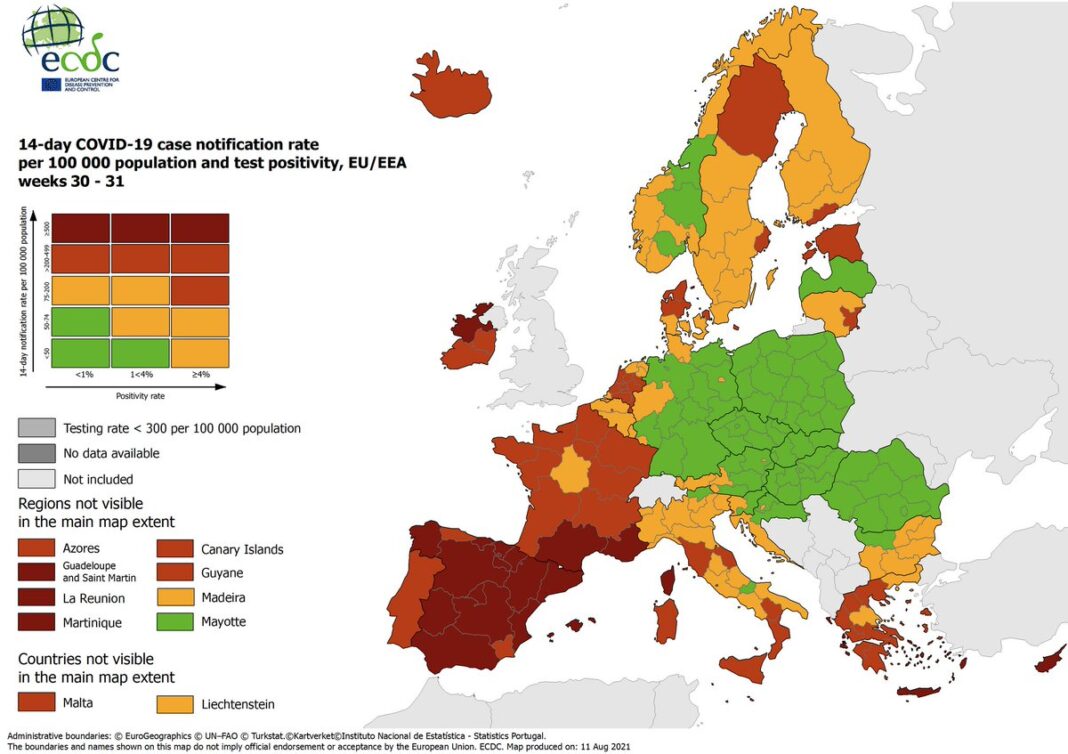 The European Centre for Disease Prevention and Control (ECDC) has released fresh weekly maps of the current Coronavirus status in EU nations, Iceland, Liechtenstein, Norway, and Switzerland, urging Member States to impose/remove entry restrictions based on the information.

The updated maps show that further travel restrictions should be implemented among member states, as more nations have turned red from yellow, due to an increased number of COVID-19 instances across Europe.

According to these maps, nly the Centre Region in France remains yellow, while the three other regions that were yellow last week — Bretagne, Hauts-de-France, and Bourgogne-Franche-Comte – have now gone red.

The Midi-Pyrénées, Languedoc-Roussillon, and Provence-Alpes-Côte d’Azur, on the other hand, have remained in the dark red category since the maps were updated on August 5.

Lappland, Norrbotten, and Västerbotten in Sweden have turned red. Uppaland is still crimson, whereas the rest of the country is yellow.

Vilnius, Lithuania’s capital, has similarly gone from yellow to red. The situation in Norway has also deteriorated, with the counties of Viken and Nordland turning from green to yellow.

Other EU countries have also experienced changes in the present COVID-19 situation. Romania is mostly yellow now, after being fully green last week. There are more red areas in Italy, while certain portions of the Netherlands have gone from red to yellow.

The situation in Spain, which is predominantly dark red, remains dire. Murcia, which has gone from dark red to red, is the only region in Spain that has changed colours since last week.

According to World Health Organization data, some of the nations indicated above have reported the following number of new COVID-19 cases in the last 24 hours:

The Europan Union Council initiated and agreed on the common maps in an attempt by the bloc to protect freedom of movement in the EU. The countries hope that by using these maps, Member States will be able to better coordinate limits on free movement in response to COVID-19.