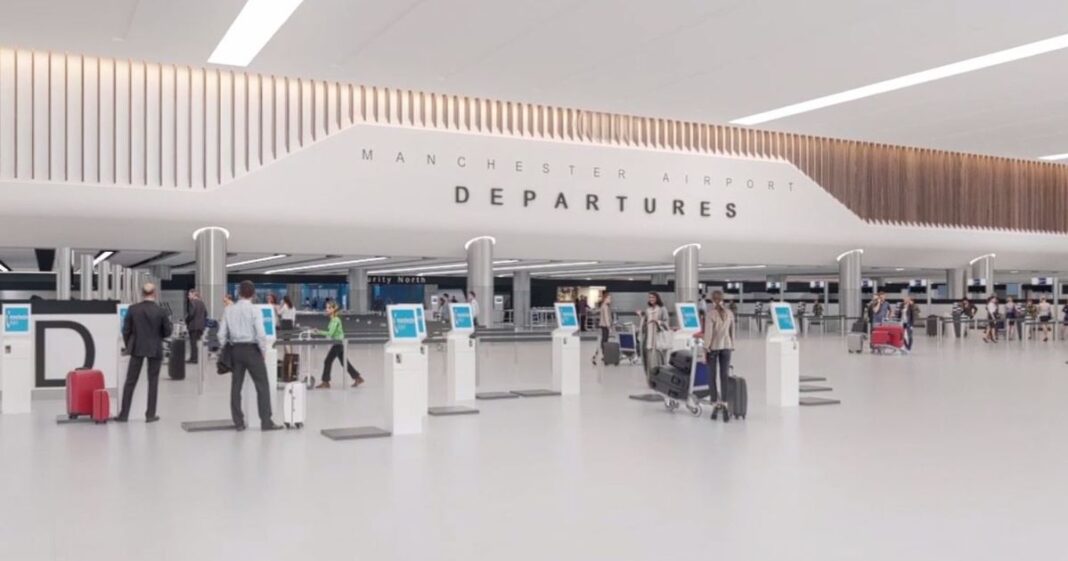 Manchester Airport is scheduled to open its new ‘Super Terminal’ this week, with the first passengers expected to travel through the huge expansion.

The Terminal 2 revamp, which was first announced in 2015 and finished months ago, is the centrepiece of Manchester Airport Group’s £1 billion transformation initiative.

However, the initial opening date of summer 2020 was postponed due to the coronavirus pandemic, which caused international flights to be grounded.

Rescheduled for May this year, then June, its launch on Wednesday will have been a long time coming.

Last week, unions organised a demonstration of airport workers and even hub managers, pleading with the government for further help as the furlough scheme comes to an end and fears for the UK’s travel industry grow.

As a result, the new terminal may represent a ray of hope for industry insiders, workers, and travellers alike.

Meanwhile, the Departure Lounge features a honeycomb light installation with ’16 million settings,’ a tribute to the Manchester worker bee. The main attraction is an 81-square-meter digital screen that displays flight information.

Many of the stores, cafes, bars, and restaurants on offer, many of which hail from the north, have pledged to serve consumers at high street pricing.

Two airport-operated lounges, each with a capacity of 400 people, are located on the upper level, with floor-to-ceiling windows providing customers with panoramic views of the airport.

Passengers arriving at the hub will be greeted by a new immigration facility that is four times larger than the previous one. In addition, a modern new baggage reclaim will open, with three of the eight new baggage belts operational at first.

Because of the’staggered launch,’ Jet2 and TUI flights will begin operating from the terminal on July 14 and 15, respectively, with additional airlines following in the weeks ahead.

On Wednesday, there will be only three departing flights, each carrying up to 600 passengers, to Menorca, Ibiza, and Palma de Mallorca.

More aircraft and facility announcements will be made as the government improves its traffic light system and seeks to eliminate the necessity for double-vaccinated travellers to self-isolate.

Manchester Airport’s Managing Director, Karen Smart, said: “It is a proud milestone for our airport as we begin to emerge from the restrictions brought about by the Covid-19 crisis, and an important moment in our 83-year history.

“This project was always about offering the modern airport experience that families and businesses across the North deserve as they travel through their international gateway to the world, and our new terminal certainly delivers on that goal.”

“The impact of the pandemic on the travel industry means we are not able to immediately welcome as many customers and airlines into this fantastic new facility as we would have hoped.”