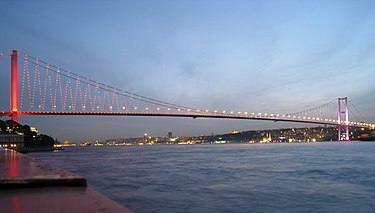 On Friday, Turkish President Tayyip Erdogan inaugurated a gigantic suspension bridge spanning the Dardanelles Strait, the latest in a series of major infrastructure projects he has prioritised during his two decades in power.

The 1915 Canakkale Bridge, which connects Turkey’s European and Asian coastlines, was completed with a €2.5 billion ($2.8 billion) investment by Turkish and South Korean firms. It boasts the longest main span of any suspension bridge in the world (the distance between the two towers).

A new Istanbul airport, rail and traffic tunnels beneath Istanbul’s Bosphorus strait, and a bridge over it have all been central to Erdogan’s successes since his AK Party first came to power in 2002.

“These works will continue to provide profit for the state for many years,” Erdogan made the remarks during an opening ceremony commemorating an Ottoman naval victory against French and British forces in the Dardanelles during World War One in 1915.

“These projects have a large share in putting our country ahead in investment, workforce and exports,” he said.

Erdogan said the price for passenger vehicles to use the bridge would be 200 lira ($13.50).

Work on the Dardanelles bridge project was launched in March 2017, with more than 5,000 workers involved in the construction.

It is the fourth bridge linking the European and Asian shores in Turkey, alongside the three built in Istanbul.

The cost of using the bridge for passenger vehicles will be 200 lira ($13.50), according to Erdogan.

The building of the Dardanelles bridge began in March 2017, with about 5,000 people working in the project.

Along with the three bridges completed in Istanbul, it is Turkey’s fourth bridge connecting the European and Asian coastlines.

Until now, vehicles travelling between Anatolia and the Gallipoli peninsula had to take a one-hour ferry ride over the Dardanelles, which could take up to five hours if waiting time was factored in. The trip will now take approximately six minutes.